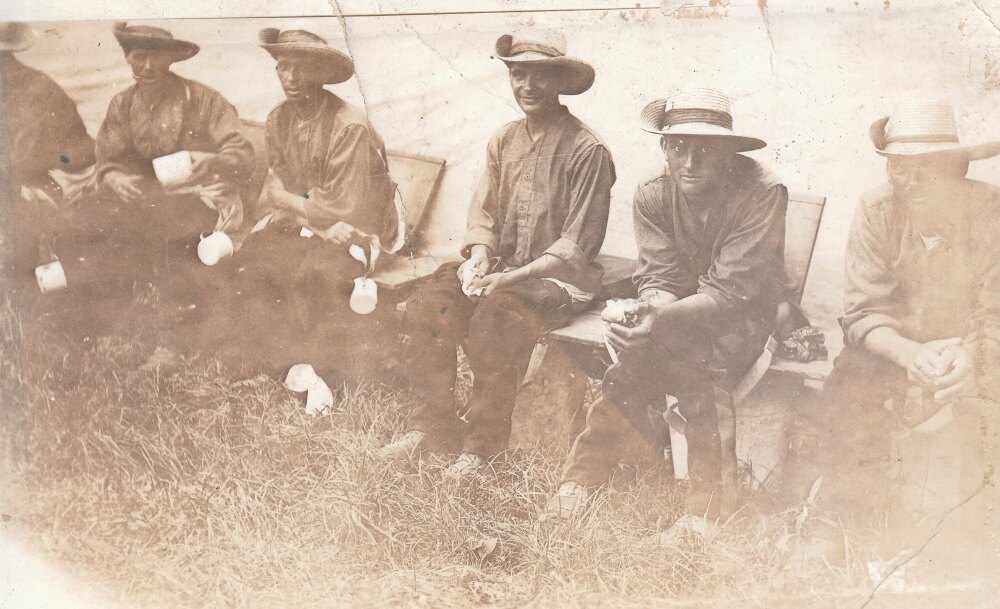 A Picture is Worth a Thousand Words

“A picture is worth a thousand words” is one of my favourite quotes because photographs give us the ability, especially with our own collections, to walk down memory lane. For photographs found in museum collections, we don’t always have the full context of the image, but they make wonderful primary sources. To historians, photographs capture a moment in time and provide us with context to the places, people, and events in history.

This photograph is a First World War image of a group of men that trained at the Polish Army camp known as Camp Kosciuszko. But if you look closely, there is something rather humorous about this picture. If you can’t figure it out just yet, stick with me.

We were very fortunate to receive a CD of a scrapbook of images of Camp Kosciuszko from the Polish Army Veterans Association in the Spring of 2017. Some of the images that they gave us are amazing. And several of them, including this picture, was featured in our year-long exhibition about Camp Kosciuszko.

During the planning stages for this exhibit, I thought it would be a great idea to display a “cow cud” hat that these men would have worn during the hot summer months. This sparked a debate amongst the co-curators of this exhibition if they would have worn them. Certainly, the men of the Canadian Expeditionary Force did, but we were not 100% certain if the Polish recruits did. As I was going through the images on the CD, I came across this image, and it was definitive proof that the Polish soldiers wore them! And they even appear to have had a special band around the brim! Haza!

Can you see what is funny about this image yet?

Our exhibit on the camp drew in many visitors from Canada, the United States, and Poland. We also had a dignitary’s including the Consul General of Poland, the Speaker for the Senate of Poland, and the Ambassador to Poland come by the Museum to see this exhibition.

It was when the latter dignitary was at the Museum when our curator, who had been on maternity leave during the planning and installation of the exhibit, noticed what I had overlooked about this picture. If you look closely, you can see that their pants are pulled down. I had put a rather large photograph of men going to the bathroom on display!

While I still stand by that this was a great image, the setting of this particular photograph makes you wonder why on earth someone would take it. Was someone goofing around after a long day in the sun? Were they trying to document what life was like at the camp? But let’s place this image in the wider picture of history. Firstly, Camp Kosciuszko is a unique part of Canadian history. This group of men, made up of Polish citizens in America, was trained by the Canadian Expeditionary Force to fight for the French Army. Any image of what camp life was like provides us with a unique view into Niagara’s role in the re-birth of Poland. If you can, even for a moment, look beyond the latrines and the now obvious roll of toilet paper, you can see the clothes that the men wore, their cow-cud hats, and the tin cups around their waist (which likely indicate the importance of their mess kit).

Yes, pictures are worth a thousand words, but sometimes they are also worth a couple of good laughs. Especially this one.