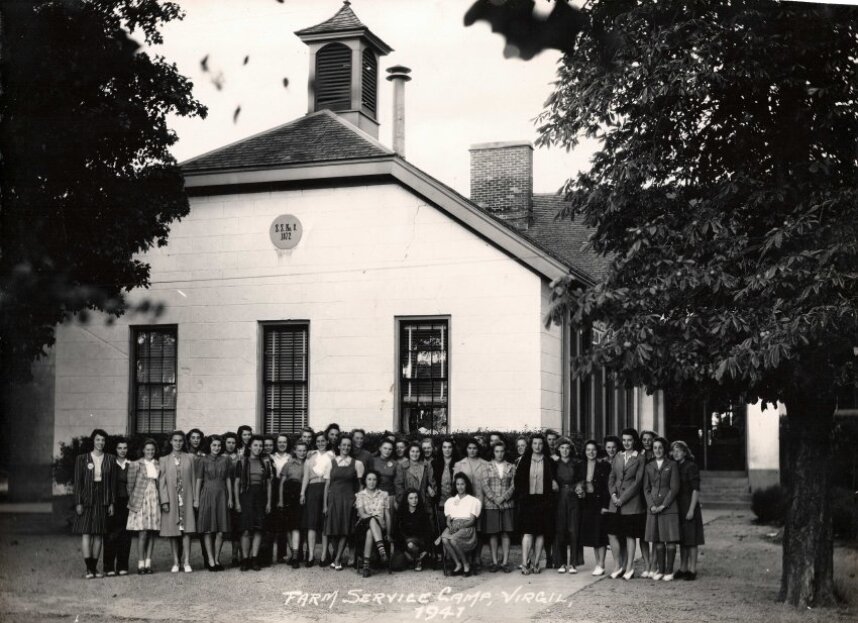 During the First and Second World Wars, agriculture and food production were essential to Canada’s war effort. With the men off to war, the government and private sector encouraged young women to help the agricultural industry. These women were typically aged 16 and over and they were hired to participate in all aspects of farm work like assisting with the harvesting of fruits and vegetables and canning. These women became known as “Farmerettes”.

In 1918, there were approximately 2,400 women picking fruit in the Niagara Region. According to a local reporter, Elizabeth Ascher, the farmerettes in Niagara-on-the-Lake helped harvest berry and cherry crops, and they later assisted during peach season. The backbreaking labour that these women endured helped Canada supply the Allied forces with much-needed food to assist them in winning the war.

These young women, who came to Niagara from across the country, were put to work in St. Davids, Queenston, Virgil, and other locals within the township. Some of the girls were housed in tents in orchards, while others were placed in high schools and empty motels. In Queenston, the Riverview Hotel was used as a Farmerette Camp which allowed 120 girls, plus staff, to serve the area.

For many of these young women, this was their first time away from home. But this job allowed them to earn money of their own and achieve independence. The pay was 0.25 cents per hour, or they were paid by the number of baskets collected. The girls picked cherries, plums, peaches, tomatoes, and grapes. Those who worked on the farms in St. Davids also worked at the canning factory peeling peaches and pears.

Their time in Town was not only spent working on the farms— many of the camps allowed the women to have one night a week off, with a strict curfew of 11pm, and they were given days off to explore. Eileen Johnson, who worked on a farm near Queenston, remembers climbing Brock’s Monument and waking to the Queenston dock to watch the Cayuga steamship come in from Toronto. While at the dock, she would yell out to the American’s boating on the river, “We won the War [of 1812]”! Humorously the boaters would yell back, “Like hell you did”!

When October rolled around, the picking and packing season ended the girls were sent home until they decided to return next season. Many of these women remember with fondness their time on the farms in Niagara.