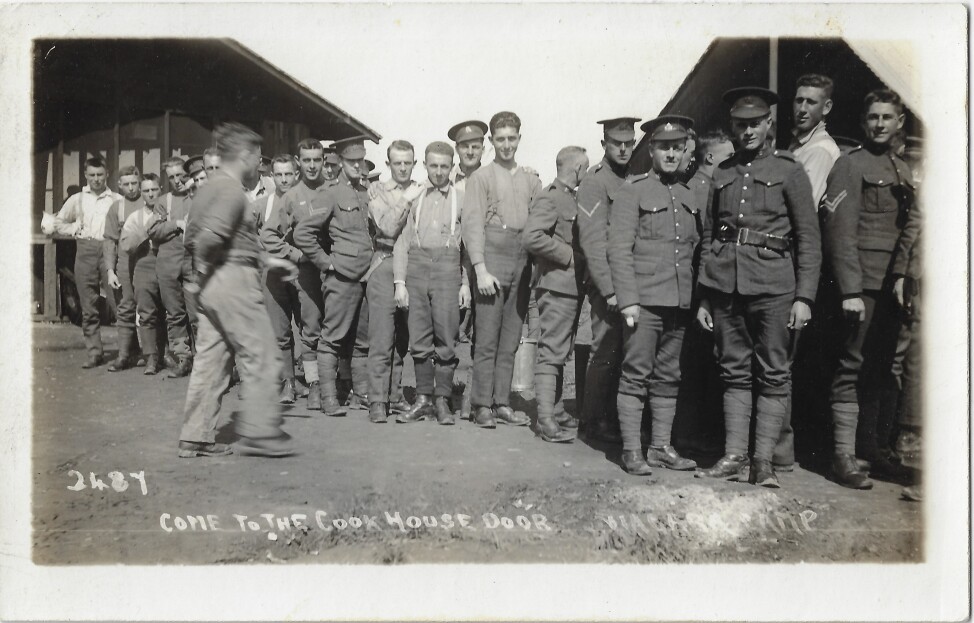 It's In the Cards: It's Worth a Thousand Words

They say that a picture is worth a thousand words – but it would be worth even more of we knew who took the picture! The Niagara Camp Real Photo postcards in the Niagara Camp binder of the John Burtniak Collection carry few photographer attributions. What do we know about the few that can be identified?

A photographer from Hamilton, A. H. Hardwick, has taken several photographs of scenes and groups at the Camp during the First War.

A favourite of mine is a shot of the line-up at The Cook-House Door. Meals would have been a highlight of the day for these young trainees. Hardwick was very professional in his approach, putting captions on his photos and reference numbers for his own filing system to easily locate copies for any subsequent orders.

And thank you, Mr. Hardwick for identifying yourself on the back of the card with a rubber stamp. Photographs tend to be groups of individuals such as this one. There are some 20 faces that are more or less visible. That means 20 possible sales if each subject buys a card. What a great memento to send to family back home to assure than that you were all right and eating regularly.

And why not? The folks back home will want to know that you are receiving the basic human necessities – food and shelter. And they know that shelter is in the form of tents, which are illustrated in many images of every military camp. So, illustrations of the other basic need are fine fodder for the photographer.

Sometimes a man would place an ‘X’ over his head to clarify which face was his, particularly in a crowd. That’s not the case here. But in another Hardwick card there is much more specificity. 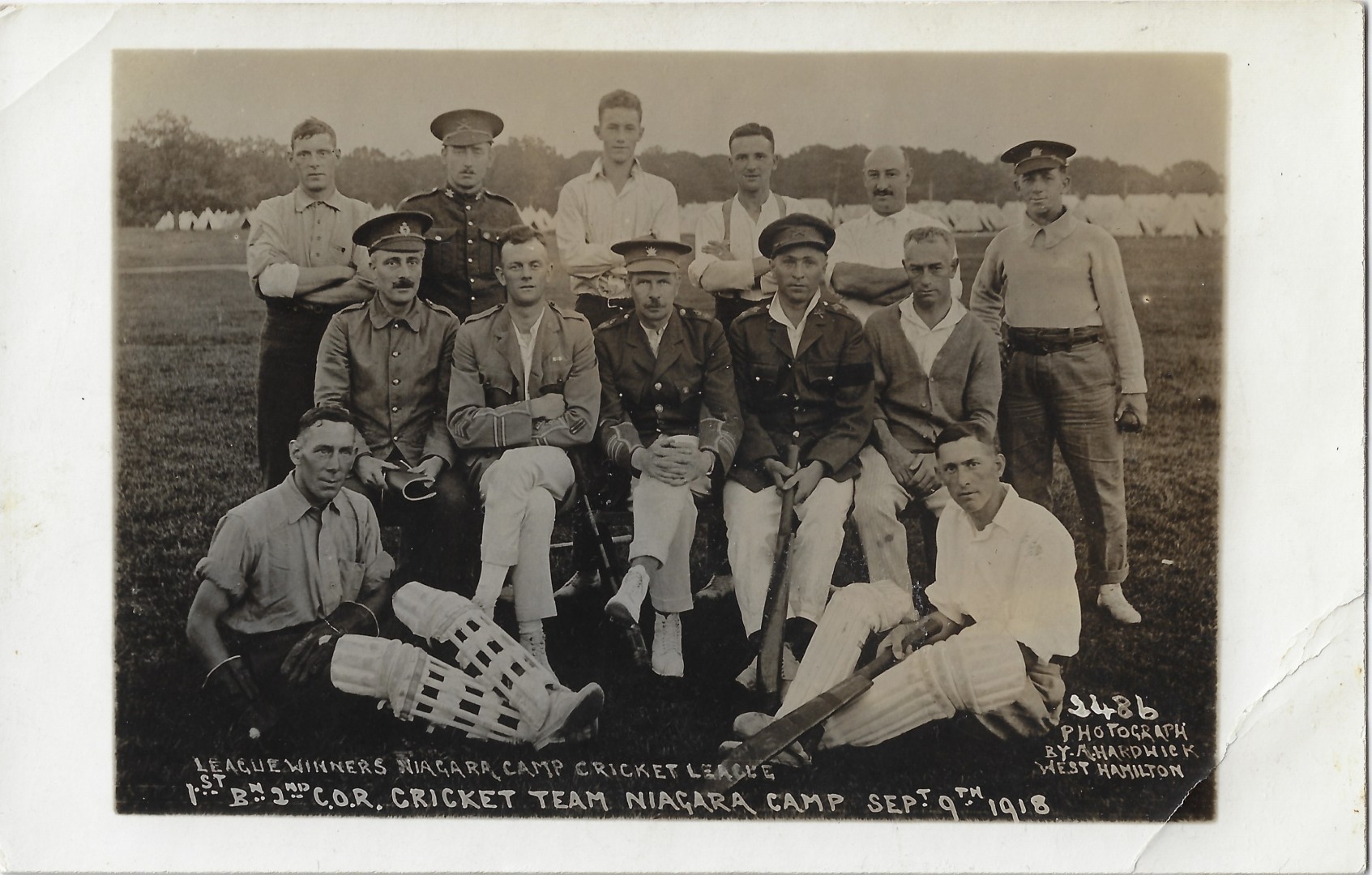 These are the league winners in the Niagara Camp Cricket League, men of the 1st Battalion C.O.R. in 1918. Yes, Mr. Hardwick has even dated the photograph.

Of particular interest is the note on the back of the card written by the purchaser, with the name ‘for Mr. J. Aneley from your Old Friend Harry.’ So, who was J. Aneley? An internet search shows that he was a participant in college cricket in New Zealand in 1892. However, we can find no clue about ‘Harry’ the sender. 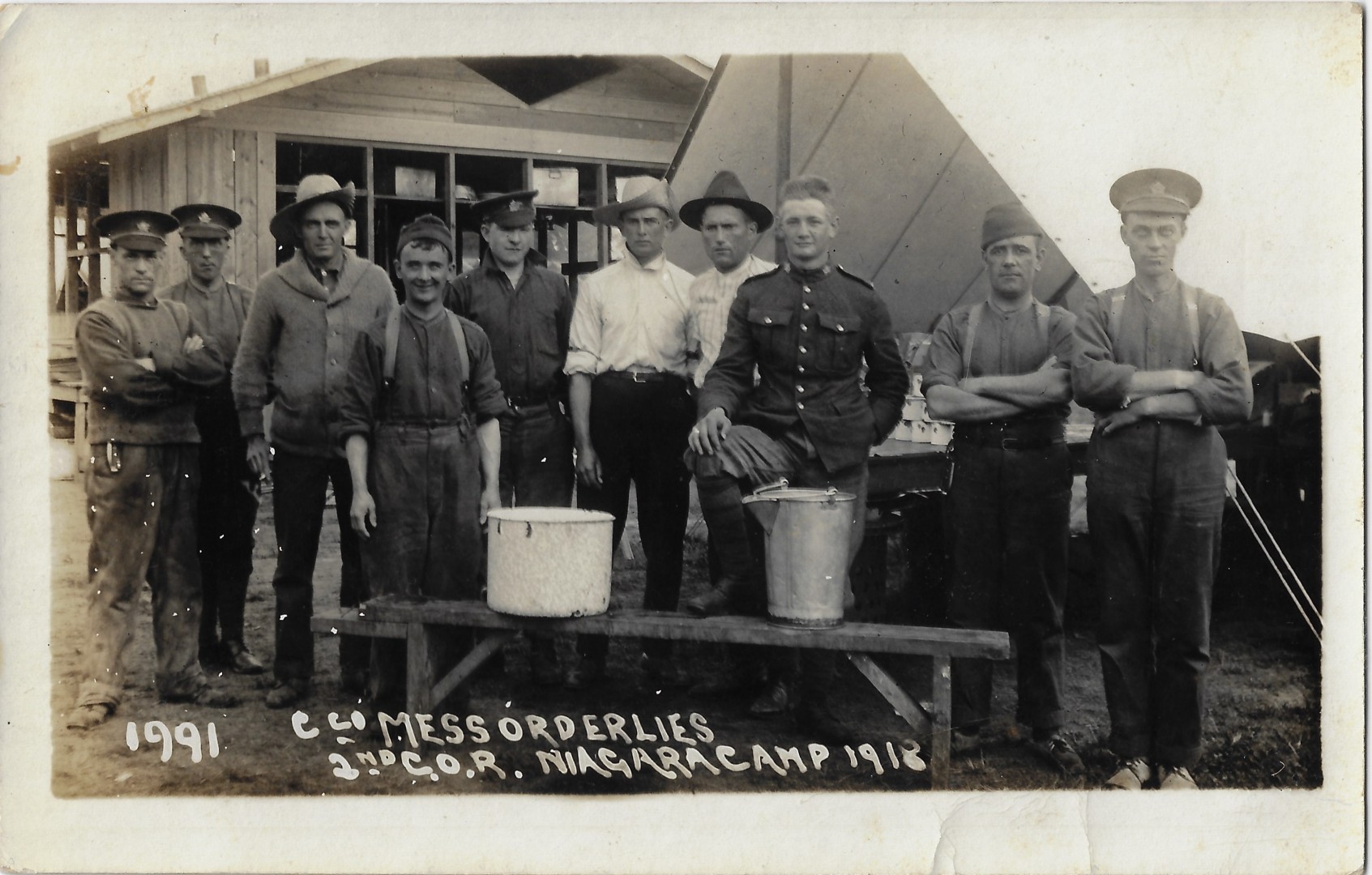 Hardwick’s photos display a range of activities but seem to focus particularly on food. In this case, it’s the Mess Orderlies, with ten men pictured, all of whom are candidates to buy a copy of the photo.

And some of their ‘customers’ might also want one as a souvenir of the camp experience or to send home to family to show that there were at least ten men assigned to food preparation and service. I don’t know about you, the reader, but by today’s standards that dirty-looking and chipped white porcelain pot doesn’t generate pangs of hunger in my stomach!

And we have just one of the few identified photographers to thank for all of these. There are others, but these give us enough of an insight to thank him particularly for journeying all the way from Hamilton to take these photos. Yes, it was business, but he also left a lasting record for us. Thank you, Mr. Hardwick.