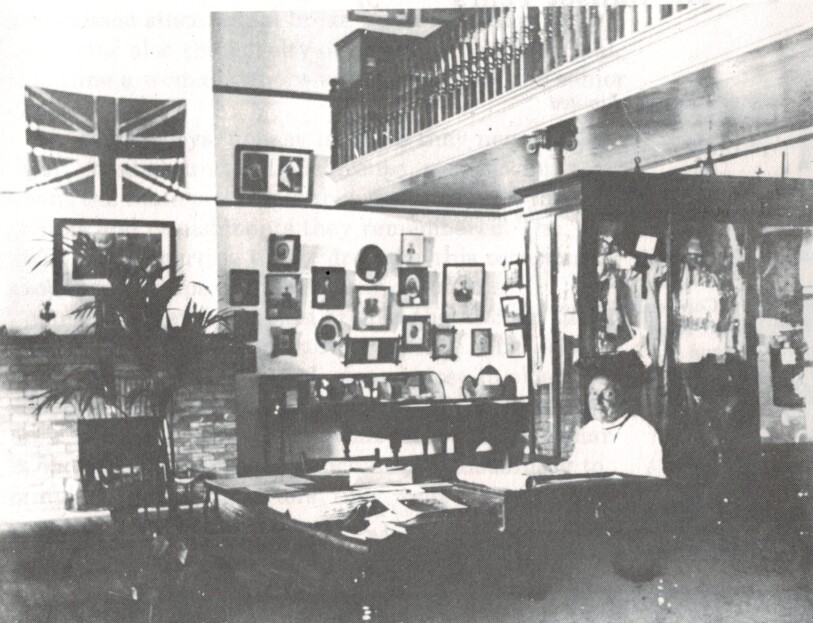 Welcome to the Niagara-on-the-Lake Museum’s Blog! We are very excited to start sharing historical research written by staff, members, and community researchers for everyone’s enjoyment!

Where better to start our blog than with a bit about our history!?

On a snowy day in December 1895, fifteen residents of NOTL met in the Library, previously located in the Courthouse on Queen Street, to form what would be called the Niagara Historical Society. At the time, several people doubted the Society’s ability to collect artefacts of significant interest, believing that everything had been given away or destroyed, or that no one would give anything for such a purpose. Fortunately, the newly formed Society, under Janet Carnochan’s leadership, ignored these sentiments. Janet Carnochan was our first President and later, a curator of the museum for several years. She is also a noted author for the book “History of Niagara”, which is still referenced today by many local historians.

In 1896, the Town Council of the day granted the use of the Grand Jury room on the third floor of the Court House on Queen Street for Society meetings and to house the historical collection. The early Society collection consisted of artefacts of both local and national interest, many of which are still maintained by the Society today. Stay tuned for another blog on some of our earliest pieces!

Within a few years, the Society’s Board of Directors knew their collection was growing rapidly. Cases were overflowing with artefacts, and it was becoming increasingly difficult to catalogue the collection. Furthermore, if a fire ever broke out, it would be challenging to save the irreplaceable collection from the third floor of the Court House building.  They needed a new home!

The first printed reference to a museum building was in a circular issued by the Society in 1898.  Since the beginning, it was suggested that the Society’s first act should be to recognize, through a monument, the landing of the United Empire Loyalists in Niagara, those who left their homes of plenty and travelled at great danger to the wilderness of Niagara.  The Society wholeheartedly agreed, and they asked the membership for advice - what form shall it take? A cairn? A tower? One suggestion included in the circular, probably by Janet Carnochan, was to create a memorial that would not only honour these individuals but also house the increasing contents of the historical room. Fortunately, the idea was met with support by the membership! A few did propose that Town Council give the Courtroom to the Society and funds should be raised to renovate the space to accommodate a museum instead.  The safety concerns and lack of accessibility at the time resulted in little movement on this idea.

An active fundraising campaign ensued with Janet as the convenor of the fundraising committee. She took this role very seriously and started by writing six letters a night for several weeks to various politicians, philanthropists, Society members and associates. Both members and non-members of the local community responded with support.  The Committee started with $150 of their own funds, $50 from the Ontario Historical Society and another $50 from an anonymous member.  When it was all said and done, the Society raised $2,000 from Society Members, associates, and the community. Funds were also solicited from the Federal, Provincial, County and Township governments. The total cost for this new museum building was $4,924.78. The Society raised 95% of the costs, only managing to borrow $275 from the bank, which was paid off two years later.

The next question to be addressed was where this building would be built. One reference suggested the foot of King Street, near the fishery grounds.  However, discussions with Town Council suggested that the new site be located in the Town Park, or Simcoe Park as it is known today. You may think that opposition to development is a new thing for Niagara-on-the-Lake residents, but it’s not! After an editorial in the local newspaper and other vocal opposition was expressed, the idea was dropped. The Society did not wish to antagonize public sentiment and decided to look elsewhere. Janet then offered a site on the Main Street, nearly opposite of St. Vincent de Paul church. This was accepted. However, upon close inspection it was realized that being on a sloping ground would cause additional expenses, which they either did not want or could not afford. John Carnochan, Janet’s brother, offered to exchange it with a piece of his property on Castlereagh Street.  At the time, this also inspired some cries of opposition because it was said to be “too far away” from Town, but that sentiment conceded when they realized that the building would now face the historical plain known as the Commons and it would be visited by young soldiers during their summer military training. It was the perfect place. Unfortunately, that scenic view didn’t last forever.  Following the Second World War, wartime homes were built in front of the Museum.  Janet and John switched ownership of their property and then Janet deeded a portion of her plot on Castlereagh to the Society.  It is funny to think we could have been right in the thick of Old Town’s tourist district.

According to Janet Carnochan, the preliminary drawings of the new historical building were completed by a “celebrated young sculptor” named Mr. Allward. Walter S. Allward would later become even more famous for the iconic and breathtaking Vimy Monument, which recognizes the great Canadian victory at the Battle of Vimy Ridge, but more importantly, the graveless soldiers who died fighting on French soil during the War.  This plan was slightly altered and then taken to the architect William Bryson Allen (1838-1911). Allen was a popular architect from St. Catharines who designed several Niagara buildings, including the Grantham Academy (former building of the St. Catharines Collegiate), the Merritton Town Hall and Cotton Mill, the Bank of Commerce building in Thorold and St. Patrick’s Roman Catholic Church in Port Colborne, among many others. Allan’s last design was Memorial Hall.

This two-storey building with full attic has been relatively unaltered since its construction in 1906. The foundation of the building is constructed from coursed rubble, reportedly obtained from the ruins of the Indian Council House and Hospital (built originally in 1816/17 and destroyed by fire in 1881) on the Commons. The plinth of the walls and the sills of the openings are made of cut limestone, obtained from the former John Rogers Dry Goods Store on Queen Street (demolished c1900).

The roof style of Memorial Hall is called a hipped roof. They used buff brick to accentuate the windows, such as the “Darte” style at the quarters of the circle which surround the side gable windows. Other Niagara-on-the-Lake buildings that use the buff brick accents are the museum’s historic High School building, the Prince of Wales Hotel, Grace United Church, and the old Public School on Platoff Street.

A call for tenders was issued in St. Catharines and Niagara-on-the-Lake in January 1906, but several proposals were well over budget, all reaching above $7,000. So, the committee decided to reissue a revised building plan and they received one quote, which was slightly under $4,000. Funny enough, or not, it was from a James Dorrity and a John Carnochan, Janet’s brother, who were both local carpenters in Town.  They broke ground in April 1906 and completed the building in the spring of 1907, just in time for the Official Opening on June 4th, 1907. It was declared a half holiday by Lord Mayor Randall and the Lieutenant Governor, Sir William M. Clark, as well as the Ministers of Agriculture and Education attended. News reporters came from the Toronto Globe, the Star, the Telegram, the St. Catharines Standard, and the Niagara Falls Review.

The building would be called Memorial Hall and it would not only recognize loyalists, but it would also act as a memorial to “whatever good or great has been done here in the past”. This was possibly a compromise after several lengthy discussions on the many deserving people in our history who should be honoured. There are many! So, I guess next time they want to erect a monument in Town, you could just say…”ah no need, Memorial Hall’s got us covered!”

In 1949, the Society took possession of the 1875 High School building next door, which closed in 1947.  In 1971, the Link building was built to join our two heritage buildings. Eight of the front windows were obtained from the former Parish Hall of St. Mark’s Church, which were removed in 1965.

Our organization started with a membership of 53 people, a collection of 250 items and a museum that was opened every Saturday for two hours. In 2020, we celebrated our 125th anniversary! Our membership is now approximately 600 individuals. We have a collection of over 53,000 pieces and a museum that is open daily (during non-covid times of course!). We have also adapted to the times by renaming ourselves the Niagara-on-the-Lake Museum, while also maintaining our legal name of Niagara Historical Society. Wow! We have come so far, and we can’t help but think how proud Janet would be to see us now and how we will continue to grow in the future!